How does the hexbeam compare with a vertical antenna?

There are a bazillion verticals sold by various major ham manufacturers. These antennas boast coverage on all bands frequently and can be quite pricey. Some have top hat arrays of spikes and mini whips. Some claim to operate without ground wires normally needed to augment the ground for a vertical. Their main advantage is that they can be installed discretely and in areas where covenant and deed restrictions prevent other more conspicuous antennas such as Yagi beams, Quads and the like. But how do they work?

Verticals are actually pretty effective when located over salt water where the electrical RF ground is good or where there is an elaborate system of underground wires emanating from the base like a spider web. This is because the good ground gives the vertical a low angle of radiation and thus longer skip. But what about the typical situation where an elaborate ground is not used and the vertical is inland away from salt water? Below is a comparison of the radiation pattern of a vertical (blue trace) on land, overlaid with the pattern of a hexagonal beam (red trace) at 30 feet. The first pattern is the elevation pattern and the second is the azimuthal pattern.

You can see the forward gain of a vertical is only one tenth of a hexagonal beam (10dB less).  It’s no wonder that manufacturers of verticals never publish the gain figures. And notice that the hex suppresses signals from the back side better than the vertical, resulting in less QRM on the hex. The vertical doesn’t discriminate; but it works equally poorly in all directions. 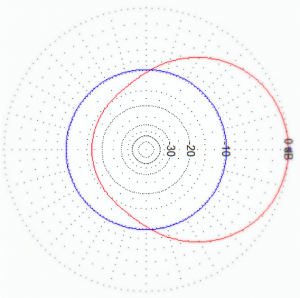 Now it is true that if you have an excellent ground system, the angle of radiation for a vertical can be much lower than the hexagonal beam making its effective radiation at that low angle better than the hex. So in that case, the vertical is going to do better than a hex for DX.

But the problem is that you must be on salt water for this benefit or else have a very elaborate system of ground wires beneath the vertical.