Rain on my Hex

What size mast for my Hex?

How come the SWR on my hex beam goes up when it’s raining?

Good question. Many hex owners discover when it is raining that their SWR is higher than usual, maybe by almost a point. Then when things dry up, the SWR returns to normal. They scratch their heads wondering if water got into the center post or if the cords connecting the wire sections are conducting RF current when wet. Neither is true. The change in SWR during rain is caused by something else.

There has been some research done on this by a radio scientist in Yugoslavia who is also an amateur radio operator (YU1AW). He has published several technical articles on the subject of wet antennas. He shows that antennas generally are affected by rain because the water on the elements is similar to temporarily adding insulation to the wires. This additional “insulation” shifts resonance downward in frequency. As a result the SWR at the normal resonant point is increased temporarily. This effect is greater proportionately on wire antennas than on aluminum tube antennas. The effect is also greater on hex beams than on other wire antennas. But when things dry out, the temporary “insulation” is gone and everything is back to normal.

Does this mean I can’t use the beam when it’s raining? No. Just tune the SWR out and go right ahead. The beam is still working; you just have a temporary de-tuning issue that shouldn’t stop you from working DX or having QSO’s.

Previous SWR on my Hex
Next How does a Hex work? 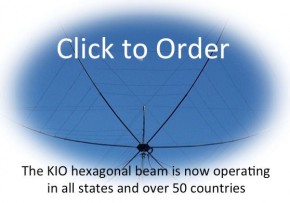