How does the hexbeam compare with a dipole?

The dipole is actually a pretty good antenna. You can build one with very little expertise and only a few dollars, using trees as masts. They perform well in many cases and for the low frequency bands such as 80, 40 and 30 meters, they are usually not competing with directional antennas so everybody can be on a level playing field. Get an amplifier and become the big signal on your 75 meter net.

How about for DX and the bands above 30 meters? Well, the dipole still is a good performer and is even easier to install because it doesn’t take a large lot to put one up. 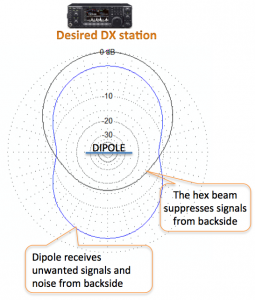 But what about a station that is off the end of the dipole (east in this example)? Well, this is a different story altogether and shows the big advantage of a hex. The hex just turns east toward the DX target and you can see the difference on the chart below. Now the dipole has a 10 dB disadvantage or about 1/10 of the signal that the hex has. This is the most obvious advantage of a directional antenna. But that’s not all.

The dipole station while sending a signal only 1/10 of the hex signal, is receiving signals from stations north and south that it really has no interest in. This is QRM big time. So the dipole station has trouble 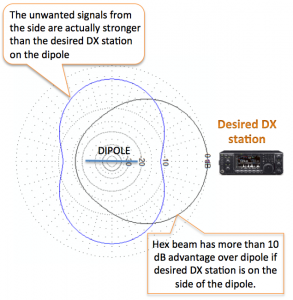 These two factors, directionality and back/side signal suppression are what make the hex a huge winner over a dipole in most instances. Again when broadside, the dipole does a respectable job but because it can’t be rotated, more times than not it has a big handicap in snagging the DX. This limitation of the dipole is generally the case for any fixed wire antennas such as G5RV’s, doublets, windoms or whatever.

Previous History of the Hexbeam
Next What makes the Hexbeam such a hot antenna?

How does the hexbeam compare with a vertical antenna? There are a bazillion verticals sold …